Since I do plan to fly my RV10 under IMC, I decided to have static wicks installed, specially after hearing multiple reports of PFD "white-outs" on planes without them (apparently the LCDs we use are very sensitive to static charge and eventually just stop working).

I started my research by looking at what other builders did, and found the very useful post by Mouser and another similar one by Tim Olson. Both of them used Dayton-Granger 16165, which sounds like a safe bet since Dayton-Granger themselves provide proposed installation instructions specific to the RV10. As much as it would be fun to remember Maxwell's equations to do the electromagnetic calculations myself, I thought I'd trust a company that does this as part of their business :) I'm going to follow Mouser's suggested bill of materials, so I ordered the parts for the rudder and elevators:


The next step is to make sure the electric charge can flow all the way to the wicks. Since I'm priming the parts, the surfaces are not conductive, so I measured the resistance of the skin from distant rivets on and got good results (1-2 ohms). For inter-part conductivity, I mounted one of the rudder attach bolts to the VS and saw that it's a poor conductor, meaning I need to do additional bonding there. The standard way to do bonding is with a braided strap. I also looked at pre-assembled straps with holes (such as this, this, this, this and this), but found that most come in inconvenient lengths and/or hole sizes, so I ended up ordering the braid plus 33457 terminals from Aircraft Spruce.

To attach the bonding strap to the parts, I'll add a nut plate to both parts (e.g. rudder and vertical stabilizer), for which I picked the same AN366F-1032A nut plate and MS35207-261 screws. The FAA AMT Airframe handbook (chapter 9, figure 9-146) shows the recommended sequence of washers, nuts and their materials for the case where you can install a screw + nut on the same side (but not for using a nut plate). Some more searching found me the Australian AC 21-99 which happens to have that same figure/table (not sure which government copied from which), but also has the equivalent for nut plates (chapter 13, figure/table 13-2): 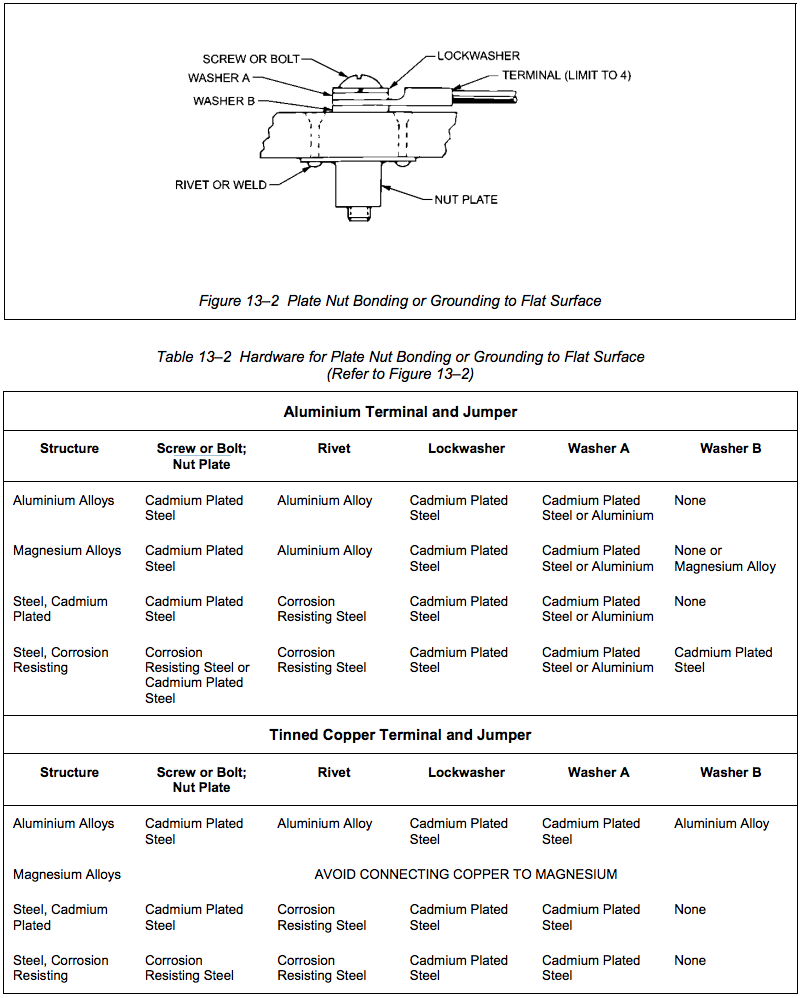 Since the braided strap is tinned copper and the structure is aluminum, this gave me (for each bonding / hole pair):
Now I'm waiting for the parts to arrive, and will make a new post with results afterwards.