We continued with the dreaded section 29, and while it takes some effort to "refine" the parts into the proper shape (i.e. beat them into submission), it has worked out well, and all the longerons are formed and drilled:

We failed to find appropriate wood (hardwood 2x4) locally to bend the skins, so we skipped to later steps for now while that comes in the mail. We aligned and match-drilled the baggage door seal angles to the mid-fuselage longeron:


We then clecoed those longerons into position, and trimmed the lower flanges of the baggage door seal angles:


We started putting the whole thing together for more match-drilling and to assert alignment: 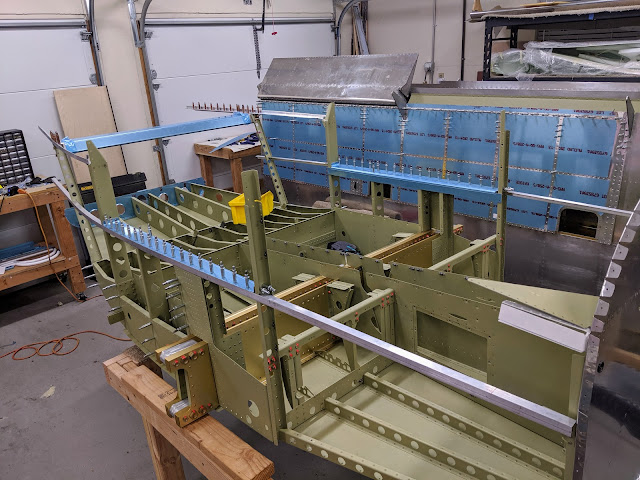 As another random item from later on, I also bent the clips that attach the lower fuselage channels: 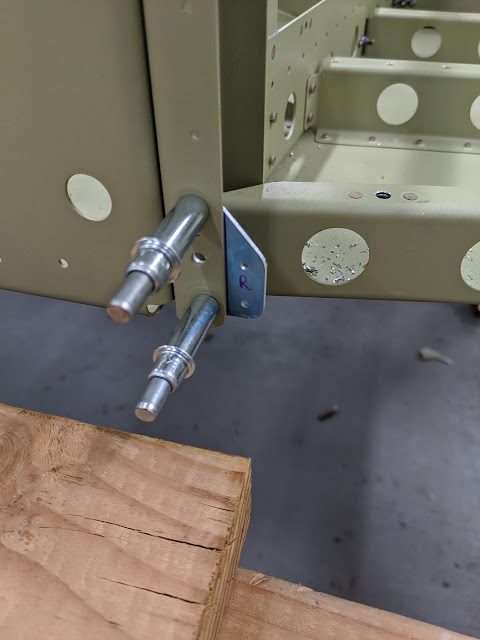 Still a lot to do, especially after that wood comes and we can actually bend and use the skins.

We riveted the center section side plate to the surrounding parts:

To install the floor panel again, of course I had to remove one of the bolts I previously installed, since it's in the way:


Then we tried to install the landing gear mounts, to drill some holes against the forward floor panels. First, it wouldn't go in, so I had to bevel a corner of the center section bulkhead (per the recommendation on the manual):


With that, the mount went in (kinda, sorta):


Such a simple task, it should have been - pop the mounts in, make two holes, take it out, done. Except nothing lined up:


Turns out the part was catching on the seat rail supports:


After trimming that, the front part was catching and also needed some significant trimming:

Since that removed a lot of the primer, we touched it up with the rattle-can type:

With that one also out of the way, now the mount flange was not parallel (grrrr), so (per Van's recommendation) we beat it with a hammer back to where it should be:

With that, over 10 hours of careful work later, we could tighten the bolts and mark the intersection of the rivet hole line and edge distances on the mount:

The other holes to drill were through the shim and landing gear mount flange:

Finally, I removed the side skins, drilled nutplate attachment holes where the landing gear mount "leg" bolt holes are, and riveted the nutplates:

With all this, the section is finally complete (except for the few items that this section would have me build but not use, like the seat floors). Now comes the dreaded section 29 (side skins).

With the work on the bottom fuselage coming to an end, we wanted to free up the work benches and build a lower stand for the fuselage so we could work on it from above. We roughly followed the one build by TASRV10 to build one. This involved a 57" x 48" frame plus 2' legs:


We used a very advanced technique to load test it (jumping up and down on its most fragile point):


The idea is that the center section bulkhead tips rest on the (48") sides of the frame, and the aft portion of the bottom skin would rest on the 57" part, for which we added some carpet padding:

That also added to its leisure function:


Turned out (we hadn't notice before) that at this point of the build, the fuselage is so perfectly balanced on the center section bulkhead, that neither its front nor aft bottom parts though the frame :) but this will likely change when we attach the tailcone.

We then finally transferred the fuselage onto it:

With this we can go back to beating parts into submission.