To make the upper portion of the bulkheads nest properly against the cabin cover, I marked the contact area between them, and sanded that flat:
For the door inside flanges, I read several reports of people that trimmed too much off and had to rebuild it (VAF post) and recommendations to not fully trim it until I'm fitting the doors (VAF post 1, post 2), so I trimmed it but gave ample margin from the suggested 1" from the bottom, and from the side scribe lines:
I looked at several photos from other builders (like these and these) and they all seem to have trimmed more than this, so I should be fine with final-trimming later with the doors. I do plan to use the McMaster-Carr seal (post).
I realize this means there'll probably be a second cut later to adjust these, but at least I can drill and countersink the holes along the flange without interference.
Towards the end of this process, I found the the Dremel rotary tool actually cuts the fiberglass much more easily than the oscillating tool, and while it makes a bigger mess, it's basically a "directed jet" of fiberglass dust, so as long as I stay away from it, I actually get less fiberglass on myself:
Besides that, I had several more passes of trimming the various flanges to fit well.
Now that it fits properly, I can start drilling the attachment holes.
P.S.: OMG I hate fiberglass. How do people find it fun to build entire airplanes out of this?
Time lapse:
Total cabin cover rivets: 0
Total cabin cover time: 27.6h
Posted by Rodrigo Damazio Bovendorp on August 09, 2020 No comments:
Email ThisBlogThis!Share to TwitterShare to FacebookShare to Pinterest
Labels: fiberglass, fuselage, section43
Location: Home

We got started on section 43, the cabin cover, which is the largest fiberglass part of the build. It starts with making some markings for later drilling the door flange:
It quickly jumps to trimming and sanding the cover. We trimmed the edges with a Dremel oscilating tool, then sanded with a combination of an orbital sander, sanding block and Dremel rotating tool, and that has taken almost 10 hours of work so far:
The corners of the door flange need some additional sanding and a notch to fit around the mid-cabin deck flange:
After 5 attempts and many hours sanding and trimming, the cabin cover finally fit properly:
In the process, I also found that the scribe lines are pretty much useless, since they don't match at all the required dimensions:
There's still a lot more sanding and trimming to be done - I haven't trimmed the other window flange, the inside of the door flanges, or the windshield flange, and the tailcone top skin flange could use some slight sanding to not push against the bulkhead.
Time lapse:
Total cabin cover rivets: 0
Total cabin cover time: 16.3h
Posted by Rodrigo Damazio Bovendorp on June 24, 2020 2 comments:
Email ThisBlogThis!Share to TwitterShare to FacebookShare to Pinterest
Labels: fiberglass, fuselage, section43
Location: Home

I got the fuel hoses from Aircraft Specialty, and installed the one that's done in this section, and torqued all the fittings: 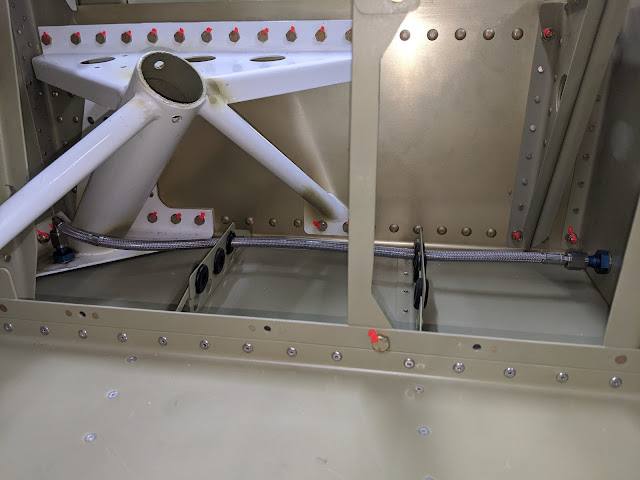 This involved enlarging the system bracket holes a little more (to 5/8"), and splitting the AN931-6-10 grommets so I could put them around the hoses (I also took the opportunity and did the same for the fuel hose holes, to 7/16" for AN931-7-11 grommets).
Time lapse:
Total brake line rivets: 8
Total brake line time: 11.0h
Posted by Rodrigo Damazio Bovendorp on June 01, 2020 No comments:
Email ThisBlogThis!Share to TwitterShare to FacebookShare to Pinterest
Labels: fuselage, mods, section36, systems

I was planning on adding access panels forward of the windshield anyway (seems to be a common mod), so I was happy that Van's released an official OP kit for this (OP-43). It works pretty much like all access panels - match-drill the doublers, cut the skin, then file it all down until it fits well:
Whenever I do the next batch of primer, I'll include these so I can start riveting them (though I won't prime for rivet the top forward skin for quite some time still).
Time lapse:
Total forward fuselage access panel rivets: 0
Total forward fuselage access panel time: 4.3h
Posted by Rodrigo Damazio Bovendorp on May 24, 2020 No comments:
Email ThisBlogThis!Share to TwitterShare to FacebookShare to Pinterest
Labels: fuselage, mods, panel, sectionop43
Location: Home

We started bending the brake lines - it was at first an exercise in patience, and our first attempt was definitely not good :)


We persisted, and the second and third attempts were actually quite decent:


With that done, I dimpled and riveted the ducted flanges to the tunnel:


For the tunnel-to-gear tubing (as well as the pedal tubing in section 38), I'm just getting the lines made by Aircraft Specialty, plus I need to torque all these fittings, so I'll have a short follow-up, but other than that this section is complete.

The next step in the tailcone attachment was, well, to detach it :) so I did:


I added the Panduit conduit mounts to the lightening holes:


The sequence here was to attach the tailcone, the baggage/rear seat floors, drill everything needed (e.g. door, floors, covers, etc.) while the cone was attached, then detach it, so that I could do a single larger batch of primer and need less post-primer drilling.

After that batch of primer, I riveted the bulkheads together:

and attached those to the fuselage - the plans call for attaching it to the tailcone first, but I figured this would be easier since there are more rivets on the baggage rib attachment:

With this, we finally attached the cone for good:


About going out of order and it being easier this way - wellll, at the very end, when we got to the part that would normally be done without the fuselage in place, we screwed up badly on one rivet and had to upsize it. We tried setting the surrounding ones but they were starting to look really bad too, so we removed it all and switched to CherryMax (CR3213-4-2, CR3243-4-2 and a CR3243-5-2 depending on the hole):


With this, section 32 is complete!

I started riveting the baggage area. The nutplate rivets on the upper baggage seal channel were going to be just impossible to buck, so I used Cherry nutplate rivets (CCR series) instead:

I attached nutplates in most places that called for them, except those that would attach them through multiple parts:

We then installed the Clickbond mounts for running the conduits underneath the baggage area:

Since we were doing that, we also installed a few of the Clickbond mounts farther forward:


One of the Panduit conduit brackets ended up being drilled too low :( so to remedy that without having to drill yet more holes, I made a shim for it:

I can't, of course, claim that I got those dimensions right on the first try, so it took a few attempts:


Now I'm just waiting for the GripLockTies to attach the conduits, before I rivet the floors for good - once that's done, finishing multiple other sections (like the baggage door) will also be possible.