We came back to the tailcone for a few unfinished items - notably, we riveted the NACA vents and the static ports:


We then ran the static port tubing:


It still needs attaching to the top brackets, which should be quick.

Attaching the aileron trim servo to the pushrod is pretty simple, and involves marking the neutral position, then attaching a bracket 6 inches to each side:


The servos and pushrods will then be connected by springs.

For securing the servo wires, I used a Panduit RAMH-S6-D attached through the same screw as the servo:


Crimped all the pins (it was slightly annoying, since the pin edges do NOT sit flush on the wire end of the crimper when the pin is this small), slipped on braided sleeving and some heat-shrink (just in case):


Inserted the pins into the receptacle and closed it up:


Shell size 11 is small, but not that small (unfortunately shell size 8 only takes up to 4 pins, and I needed 5).

With this, the only thing left on the aileron trim is actually installing it in place and wiring it to the AP servo, which will come much later.

When I installed the ailerons in place, it became apparent that they were not aligned properly - the inboard end of both ailerons was catching on the bracket's rivets: 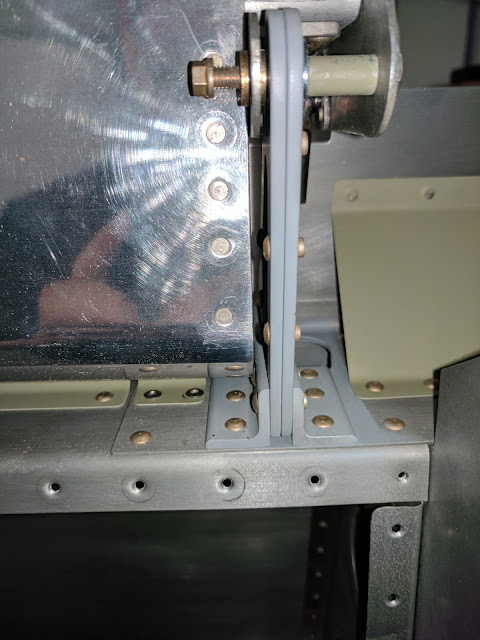 After consulting with Van's, this was solved by shifting it outboard a bit with another washer and shortening the spacer: 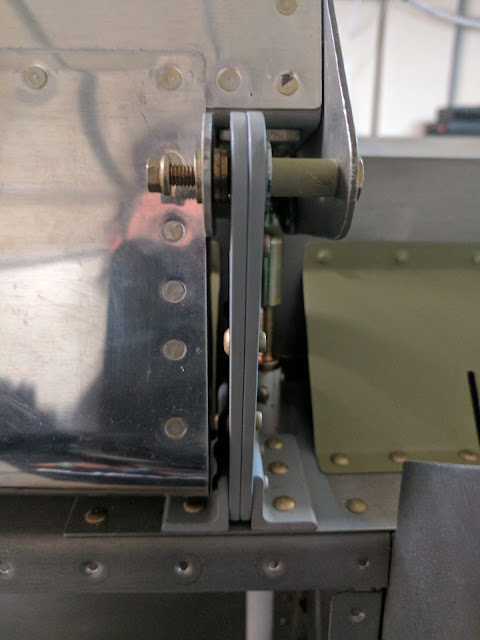 I then proceeded to installing the torque tubes and pushrods. I decided to do this before attaching the bottom outboard skin to make adjustments easier:


The last part - adjusting the length of the bellcrank-to-aileron pushrods - required installing the flaps temporarily:


then using them as a reference for the ailerons:


I removed the ailerons, flaps and pushrods again after adjusting the pushrod lengths, but the only step left is to reinstall them after the bottom skin is riveted.

In the last episode about the fuel tanks, we attached them in a hurry before moving, and some of the skin edges were still overlapping with the adjacent parts. I finally got around to removing the tanks, filing them down and reattaching. I also took the opportunity to torque their bolts properly.

This (finally, really) concludes the work on the tanks.

And of course, I couldn't have done it without my wife's help and support:

I had received my Aveo Ziptips some time ago but never got around to testing the lights - I finally got a proper power supply and did it.

The Ziptip light assembly receives a standard TE CPC, and comes with the connector and some (test?) leads:

Since they reuse wire colors, I had to identify and label the different pins:


I didn't bother unwrapping the wingtips (not until I'm ready to work on them), so I was getting the lights through multiple layers of bubble wrap plus tape that covers the lenses, yet they were bright!


Short video of the strobes:

Again the power of the quickbuild! However, the ribs had significantly more custom work than just what the plans call for - I wanted to run two conduits (power and signals) through the wing, plus pitot and AoA tubes.

To enlarge the pre-drilled wiring hole for a conduit, I followed Van's recommendation and enlarged them to the maximum of 3/4". I verified that I could get .81 conduit through the 3/4" holes using a scrap piece:


To actually do the enlarging for the inboard ribs where both skins were already riveted, I used a 12" 3/8 drill extension (from Home Depot) and a unibit which had 3/4" as its largest size:


Deburring those holes was slightly annoying and required some contorting, but was doable.
Running the conduit through them, on the other side, was VERY annoying and time-consuming:


Luckily, I recruited an intern (visiting friend) to do it for the other wing:


She looked happy on this picture - that's because then she hadn't yet realized how painful it'd be to run the conduit through the inboard section with the bottom skin already riveted on :) but she got it done anyway.

I chose to install the pitot tube one bay outboard of the aileron bellcrank (per previous post) and cut/bent/deburred/flared its tubes such that they'll go through the rib, angled such that they point towards the holes in the next rib:


In the process, I found that using a tube bender on these is a very bad idea - I tried to create a bend a little further down, and it created a kink, which made the tube break, forcing me to cut them a little shorter. Going back to the Garmin manual, I realized they were not 1/4", but rather 3/16", which explains it :/

Just in case, I protected that lightening hole so the tubes can't contact the ribs:


I drilled the second set of tube holes, for the AoA tube, using a combination of the extension shown above, long drill bits, a right-angle drill, and a snake drill (it was especially annoying to drill through the 3rd and 4th inboard ribs):

Finally, I test-ran the tubes through the bushings and cut them to size (+slack):


I realized I don't have the proper snap-on tubing connectors for the root rib holes, so I'll need to order those.

For the second conduit, I didn't want to drill another large hole, so I used ClickBond right-angle cable tie mounts (CB4020V5N12-750):

For some reason, removing the Clickbond fixtures was really hard, and in fact some of the cable tie mounts came out when we pulled them and had to be re-installed.


I ran the conduits and cut them to size (with a couple feet of slack) - it was amazingly easy compared to the first one, made me wish I had just done this for the other as well:


The outer rib has no Clickbond for now - I'm leaving that for when the wingtip is installed, so I can figure out which side won't interfere with the wingtip itself. Also, if it goes on the inside, that'd interfere with riveting. Should be pretty easy to install it from the outside anyway.

Since the 2nd and 3rd inboard ribs have no Clickbond mounts (no good reason to, and it'd be quite painful to install in the tight space), I put grommet edging on those to prevent chaffing of the conduit:


I found the right position for the Garmin GAP-26 heatet pitot regulator, one rib inboard of the bellcrank:


This position is close enough to the inspection hole but will minimize wingtip (NAV antenna/magnetometer) interference by keeping the high-current box further from the tip, and there's enough wire length to still reach the pitot tube. I match-drilled the box's holes into the ribs, then installed Clickbond CN614CR06P nutplates to hold it without interfering with the aileron pushrod:

When I test-ran the conduit, I also tried attaching the box and running the wire to the probe - the wire length is indeed good, and the run will be away from the pushrod:

In retrospect, given how much effort it was to get all of this through the inboard ribs, I probably should just have removed the inboard skin, done the work, then riveted it again - I still don't understand why Van's has to rivet that skin at the QB factory.

At this point, the only thing left related to the ribs is the root connectors (for both air and wires).