I finally did the last batch of primer (or, it was supposed to be the last, at the time) - since it was a little cold, I had to use a tent (provided by my colleague Rick - thanks!! :) ) to set up a poor man's paint booth:

I made one more small mistake - I scuffed E-918 with PreKote, without realizing it's an exterior part. I got a replacement.

With all parts primed, I got back to back-riveting the main elevator ribs:
As expected, a bunch of those had to be drilled out and replaced (but only 3 oops rivets were needed):
I also riveted one of the tip skins: 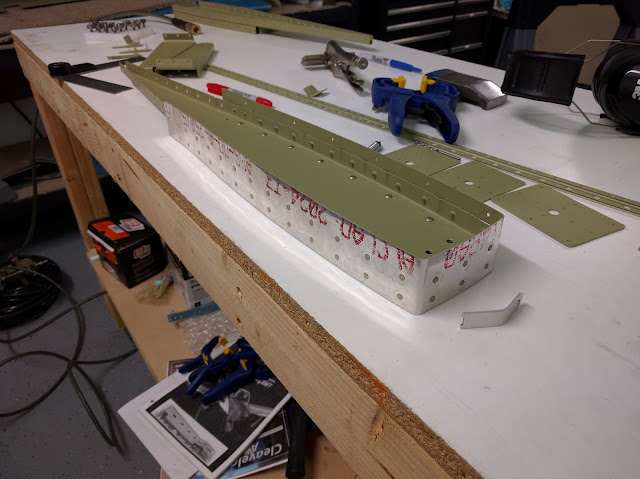 I test fit the counterweights in there, and the clearance from the rivets is very tight, but it fits:
I was going to rivet the other tip skin, but since I mistakenly primed its outside, I ended up deciding to just replace that skin for a new one (yes, that means drilling/deburring/priming/dimpling again, but why not do it right).

I also decided to make a small change to Mouser's static wick installation (which I was previously following strictly) - he has the outboard forward nutplate inside the tip rib:
That's hard to install (as you can see in his picture, one of his rivets is not set all the way), and while the Dayton-Granger diagram says to install them as close as possible to the tips, I figured that moving them less than an inch inboard wouldn't greatly affect static discharging, but would make installation significantly easier:
It's still tight in one dimension (to find the right spot where it doesn't touch the bottom skin), but that would be true anyway, and now I can move the nutplates forward arbitrarily to find that sweet spot without being constrained by the tip rib hole that the nutplate would attach to:
It also moved the inboard attachment point further away from the foam rib location (keeping the 12" distance between them):
With this I need two more of those reinforcement plates, so I cut those (they'll also need priming whenever I do it the next time).

I riveted the hinge reinforcement plates and nutplates to the forward spars:
The instructions call for having 96˚ on the rear spar and 84˚ on the forward one, which took a lot of careful bending with a hand seamer (they were off by 2-3 degrees, which was quite noticeable when I put the skins together for checking the static wick install positions above): 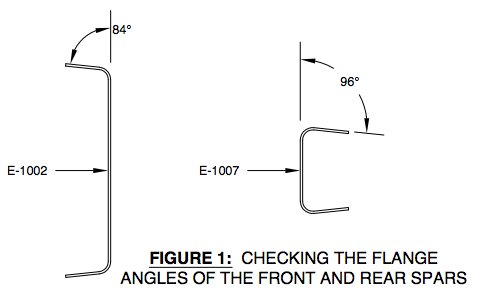 Another seemingly simple task was to rivet the gussets to the rear spars, but I managed to screw that up by riveting one of them backwards and had to redo it:
I went on to rivet the left rear spar to the ribs and skin, and got it about halfway done (I tested using riveting tape to minimize damage to the skin from the rivet set, and it worked):
This naturally involved a few more mistakes to be fixed:
Next I need to do the same for the right-side elevator - bending the spars to the right angle, riveting the rear spar, riveting the tip rib skin (after I drill/deburr the replacement skin), then on to the trim tabs.

We decided to prime the elevator parts on the 26th with the usual process - scrub with prekote, wash, dry, remark, then prime, all outside:
That was a mistake - it was ~40˚F outside, and playing with water was just...not cool (or rather, very cool). We scrubbed/washed about half of the left-side elevator structure parts, then realized it wouldn't work - parts weren't drying, the sun was going down, we were wet and freezing (and the cabin heat is only built in a much later stage :) ).

We ultimately decided to finish PreKote on the skins only (we had also already done about half of the small parts):
Then we realized the second mistake - even though PreKote can be used between 40˚F and 110˚F, the primer specs say it should only be applied with a temperature between 59˚F and 95˚F. This forced us to wait for warmer weather (and I also got a heater for the garage, which makes it comfy and helps the primer cure at a controlled temperature). 2 days later, I finally primed those parts (temperature was just barely the minimum, but good enough, and results were satisfactory):
Another minor mistake here - I primed the outside of the E-913 Counterbalance Skin, which actually sits on the exterior:
I guess I can worry about that much later when the plane is painted. I'll be sure not to do the same on the other side.

Many parts were still left to be primed, and the forecast showed only 1 day when the temperature was going to be consistently above 60˚F for a few hours (12/02):
I took that day off and primed a few more parts:
With still some parts left to prime (notably the spars), I started dimpling and riveting on the ones already primed, and set 111 rivets so far:
Next I'll repeat the process for the other 3 skins, and continue waiting for weather for primer on the spars.