The only step to be done on the flaps section is attaching them. This starts by "press-fitting" (read: hammering in) some brass bushings:


The attachment hardware goes through the bushings:


and the control hardware needs to be installed (but the actual control hookup only happens after the wings are attached to the fuselage):

I've been very slowly making progress on the bottom wing skins - slowly mostly because of weather not allowing me to prime parts repeatedly for the past few months (below 59˚F which is the minimum for Akzo).

When I got a chance, I primsed many of the smaller parts that were lying around, like the inspection covers and the pitot tube attachment parts:

I riveted the L-shaped bracket for the pitot tube:

I then got to the dreaded lap joint, which requires tapering the ends of the skins so they overlap properly. I started by testing on a scrap piece, and got OK results with the Dremel: 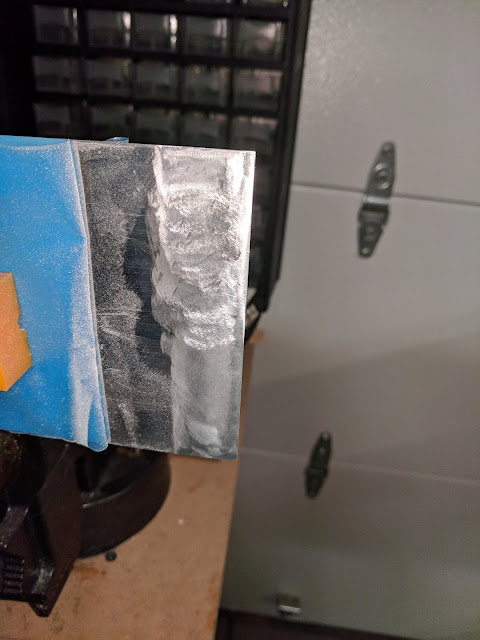 I then moved to the real outboard skin for the right wing:

Being much larger, it soon became clear that the Dremel would not suffice, so I got a random orbital sander, which did the job (not without a few hours of effort to get that tip to half the thickness and a smooth ramp in):


Wife primed that skin and I dimpled it:

Being a quickbuild kit, the inboard skin was already riveted on, so that was more difficult to sand and prime:

After a few hours of sanding (switching between the Dremel, the orbital sander and a sanding block), the end result is quite decent, and the lap joint looks flush:

Next is priming the inboard skin strip that got sanded, and repeating it all for the left wing, then finally riveting those skins in place. This week's weather promises some significantly warm weather, so that should happen soon :)